– likes to play close to the touchline 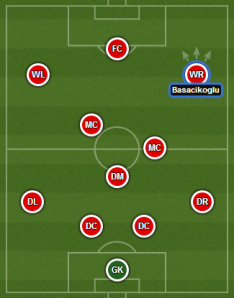 Bilal is a typical old style Dutch winger who enjoys playing in a 4-3-3 the most. During the recent UEFA European U-19 Championships at Lithuania, the Netherlands got knocked out unexpectedly in the group stages. Despite the poor form, Bilal, who was definitely a stand out player and got 3 assists in the game against the hosts. He did not make his debut in the Eredivisie as of yet, but he is a big star of the youth team in Beloften Eredivisie, the Dutch youth league. Marco van Basten should soon be giving him his chance in the first team, following in the footsteps of Hakim Ziyech or Pele van Anholt.

“Bilal is a very fast right winger. He has duel power, good crossing and goalscoring ability.”

One response to “Bilal Basacikoglu”