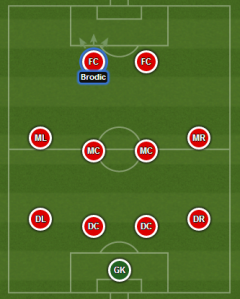 Fran joined “Hitrec-Kacian”, the famous Dinamo Zagreb youth academy, in 2011, at the age of 14. Before he was NK Zagreb player and it’s worth mentioning that he was chosen as best player of the famous tournament for U-16 players – Nike Premier Cup in Budapest. He scored 4 goals and he shared first place on the top scorers list even though NK Zagreb was eliminated in quarterfinal versus Fenerbahce. Dinamo have won the race to sign talented younster with many top European clubs, including Arsenal, Inter or Manchester United. He already made his first-team debut for “The Blues” on 14 April 2013, as an 85th-minute substitute in a 2–0 win at home to Inter Zaprešić in the Prva HNL. At 16 years 3 months and 6 days, he became Dinamo’s youngest ever debutant. He is also a member of Croatia U-17 national team with whom he participated in UEFA Under-17 Championship 2013 and FIFA U-17 World Cup 2013.

“He’s a boy with an exceptional talent, speed, aggression, motor skills, technical quality. His arrival in the Dinamo is a great thing for the future, he will be the new Modri number 9.”