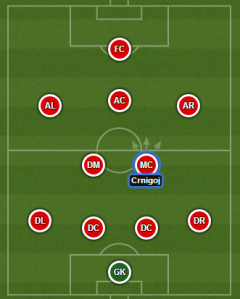 Domen is regarded as one of the most talented youth footballers in Slovenia at the moment. It is worth mentioning that at his club – Luka Koper – there are few other great prospects, such as Matej Pucko, Mitja Lotric, Leo Stulac or Miha Blazic and manager Vanoli is obviously not afraid to put youngsters in key spots. Crnigoj made his debut at the age of 16, during 2012/2013 season on 1th August 2012 in a league fixture against Aluminij Kidricevo, replacing Denis Popovic after 86 minutes of the match. He won a place in the starting XI very quickly. During current season he is already a first team regular and a very important part of Rodolfo Vanoli’s side. In 2012, he represented Slovania at UEFA Under-17 Championship which took place in his country, but unfortunately after 2 defeats and 1 draw Domen and his teammates were eliminated already at group stage. At present, he is a member and one of the leaders of Slovenia U-19 national team.

“We have 3 holders on a permanent basis as Miha Blazic, 19 year old central defender, Matej Palcic, right back very interesting, Matej Pucko, which is called small Overmars. And then two gems like Leo Stulac striker born in 1994 and Domen Crnigoj midfielder of 17 years who is already following by Udinese.”

The best players aged 23 or less (200+ mins) at the World Cup by InStat Index:
Brazil squad for the Sudamericano U-20.
19-year-old Kylian Mbappé at the World Cup 2018:
Azzedine Ounahi:
Chelsea U-18 during the 2017/2018 season:
Moroccan players paid tribute to Abdelhak Nouri after the Spain game.
Loading Comments...
%d bloggers like this: