– likes to hold up the ball 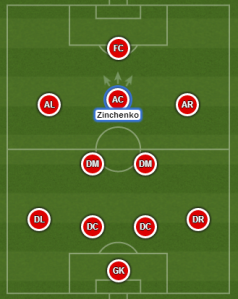 Oleksandr Zinchenko was brought up at Shakhtar Donetsk and is regarded as one of the most talented players in Ukraine at the moment. He represented Ukraine at UEFA U-17 Championship in Slovakia, but the young “Yellow-Blue” lost all 3 games and got knocked out already in the group stage. Currently he is a member of the Shakhtar youth team and is playing in the UEFA Youth League. Despite his young age, Oleksandr is its captain and its leader. He scored 1 goal and made 1 assists in 6 games and it is also thanks to him that “The Miners” advanced to the next stage, leaving Manchester United and Bayer Leverkusen behind.

“Shakhtar of any age group, whether it’s the first team, whether it is second team or youth – always plays to win.”

Enzo Fernández in Copa de la Liga & Liga in 2022 by Wyscout:
The best U-21 players of the 21/22 season by Marca:
19-year-old highly talented centre-back Souleymane Isaak Touré is the new Olympique Marseille player!
U21 with the highest potential in FIFA 07:
The Swedish Generation Next.
Lille's record sales:
Loading Comments...
%d bloggers like this: