– gets forward whenever possible 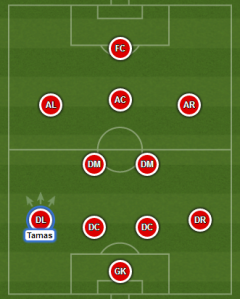 Krisztian Tamas has been a stand out player since his early years. Coming from the youth academy of Szombathelyi Hadas, he has been on the radar of many big European clubs since he was 16. Arsenal and Liverpool were rumored to be in for the left-back, who at the end ended up at AC Milan. Currently he is a regular in its Primavera team – the Rossoneri youth squad. He has been a very good player in Viareggio cup – first reaching the final in 2013 and the winning the whole tournament in 2014. It’s worth noting that he was a stand out player in both of these years. It looks like he does not have much of a chance of breaking Seedorf’s first XI, so it would be a good idea to send him out on loan to Serie B, where he could get experience and play week in, week out on the senior level. He is a regular Hungary international, currently playing for its U-19 set up.

“I’m lucky that I am a left-back, as in Hungary and in Europe there are few really good left-backs.”