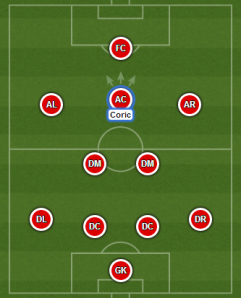 Ante Coric is one of Croatia’s most-promising young football talents. He started his career at the age of 5. When he was 7 years old, he signed for the youth academy of Hrvatski Dragovoljac. In 2008 he joined the youth academy of Red Bull Salzburg after spending one year in Dinamo Zagreb youth system. Ante spent four years playing in Austria and then, despite interest from biggest European clubs such as Chelsea, Arsenal and Roma, he came back to Zagreb to be a part of the Dinamo Youth Academy set up. He made his professional debut against Hajduk Split in famous Croatian “Eternal Derby”, coming as a 69th minute substitute for Ivo Pinto. He made his first start just 10 days later in a 1–1 draw against Lokomotiva Zagreb. He is also a regular Croatian youth international – at the moment he is a member of “Hrvatska” U-18 team along with other great prospects such as Elvir Maloku, Ante Roguljic, Petar Mamic and Fran Brodic.

“Dinamo Zagreb’s former astute Youth Academy Director Romeo Jozak , who was chased by Arsenal and is now Director with the Croatian Football Federation, believes Ćorić has the goods and is an enormous talent for both his club and for the Croatian national team in the future.”

“Ćorić is no doubt on the radar of many top clubs in Europe, after earlier attracting interest from Chelsea, Arsenal and Roma, but time will tell if he will follow in the footsteps of Kovačić and Halilović. With one of Croatia’s brightest young tennis players also sporting the surname Ćorić, Croatian sports fans could be hearing a lot more of the name in the near future.”