– killer instinct in the penalty area

– likes to enter the opposition’s penalty area whenever possible 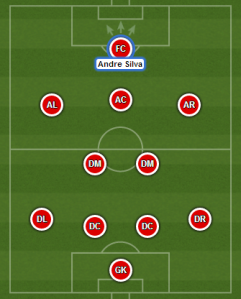 André Silva is one of the greatest talents in FC Porto B team, but there are a lot of other good prospects in this team that are expected to do great things in the future as they already show an enormous amount of talent, such as Goncalo Paciencia, Rafa, Tomas Podstawski, Tózé or Ivo Rodrigues. He made his professional debut with FC Porto during 2013/14 season in a Segunda Liga fixture against Beira-Mar replacing Tózé after 77 minutes. During the current season he established himself as a very effective substitute coming from the bench 17 times and scoring 3 goals. He has also been in great form for FCP U-19 in the UEFA Youth League in which he scored 4 goals in 6 matches but unfortunately young “Dragoes” were eliminated already in the group stage.

“André Silva, is a beast, incredibly fast and strong, probably not the most evolved player, technically (he is not that great of a dribbler) but his speed make him a player that can unbalance a team at any time of the game.”

USMNT Generation Next.
Three youngest English players at the World Cup 2022 so far:
Active players with the most World Cup goals:
Portugal has won the World Cup U-20 two times in a row - in 1989 and 1991. 🇵🇹
Julián Álvarez's last 31 days:
Kiliann Sildillia:
Loading Comments...
%d bloggers like this: