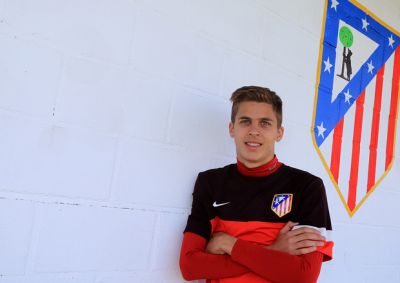 – likes to play close to the touchline

– uses his speed and skill to take on defenders

Ivan Alejo, also known as “Ivi”, was born in Valladolid and began his career with his hometown club – Real Valladolid. Already as a teenager he was spotted by scouts from Atletico Madrid and soon after joined “Rojiblancos” youth academy. He started 2012/2013 season in the under-17s, but finished in the “División de Honor” (the highest level of youth football in Spain), winning the league title alongside teammates Oliver Torres and Javi Manquillo, amongst others, all in his first under-18 season. Has been in fantastic form in this year’s UEFA Youth League, scoring 4 goals in 6 matches, but unfortunately young “Colchoneros” were knocked out by Manchester City already in the last 16. He is being closely followed by Liverpool, Porto, Juventus, Anderlecht and Tottenham, but it seems that he will stay with Atletico and should soon get his chance to make an official debut in Diego Simeone’s side. Few days ago, he has been called by manager to join the ranks of the first team during the pre-season stage that takes place in Segovia.

“Iván is a natural winger. He plays his best football out wide, where his speed and dribbling prove him to be a formidable footballer. Those who know him best compare him to Joaquín. He does, however, need to improve his goalscoring skills, having only scored three of the team’s 62 goals this season.”