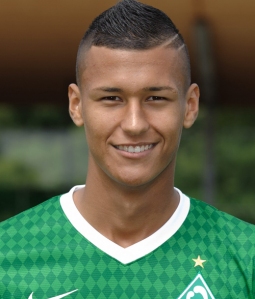 – ability to be a target man for teammates

– selfish in the final third

European Under-19 Championship 2014 winner with Germany.

Davie Selke was born in Schorndorf and after playing for few local clubs he later moved to Hoffenheim’s youth academy in 2009 and played at its various levels. During the winter break of the season 2012/13, the tall striker signed with Bundesliga side Werder Bremen, for whom he made his professional debut – on 3rd November 2013 in a league fixture against Hannover 96, in which he replaced Clemens Fritz after 63 minutes. His father is from Ethiopia but Davie regularly represents Germany in the youth games, and is currently one of the biggest stars in the U-19 team. Recently, has been in unstoppable form at UEFA European Under-19 Championship, where young “Die Mannschaft” won the title – Davie has ended top scorer of the tournament, equalling Álvaro Morata’s all-time EC U-19 best of six.

“We have a plan with him. He is going to be integrated into our Bundesliga side bit by bit. Any other club can save themselves the phone call.”