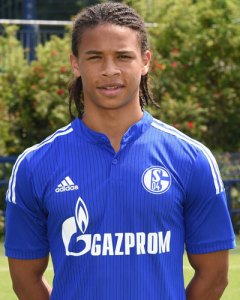 Leroy Sané began his football career in 2001 at SG Wattenscheid 09. Four years later he moved to Schalke 04 youth academy and in 2008 he joined Bayer Leverkusen, but returned to Gelsenkirchen in 2011. It was a good choice – Leroy won Westphalia Cup two times and also Bundesliga West U-17 and U-19. During 2013/2014 he demonstrated his quality on the European stage playing for S04 Under-19 team in the UEFA Youth League, in which young “Die Königsblauen” made it to the semi-final, but got knocked out by eventual champions – FC Barcelona. Thanks to all this, Schalke offered him a first professional contract and soon later he has penned a deal which will see him remain at the Veltins Arena until June 2017. He made his Bundesliga debut on 20 April 2014 against VfB Stuttgart – he replaced Max Meyer after 77 minutes in a 3–1 away defeat. His debut for the youth German national team came on 5 September 2014, against Netherlands U-19 where he came on as a sub and scored one goal. It is worth mentioning that he is the son of former German rhythmic gymnast champion Regina Weber and former Senegalese international Souleyman Sané.

“Leroy is a very talented young player able to feature in various attacking positions. He impressed during this year’s UEFA Youth League competition for our U19 side and he is already a wanted starlet. Some clubs were interested in him. We are delighted he never had any doubts regarding his future at Schalke.”