– ability to advance the ball out of the first third 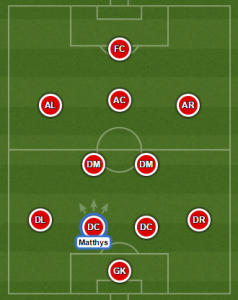 Hervé Matthys joined Anderlecht youth academy at the age of 16 in 2012 from Club Brugge. “Les Mauves” were confident that he would be a perfect replacement for Mathias Bossaerts who signed with Manchester City. In June 2014 has signed his first professional contract with the club, penning a three-year deal. He made his first team debut on 3 December 2014 in the Belgian Cup game against K.R.C. Mechelen – he replaced Frank Acheampong at half-time in a 4-1 home win. He is also the captain and one of the biggest stars of successful Anderlecht U19 team which will face FC Porto in the quarter-final of the UEFA Youth League 2014/2015 after eliminating holders FC Barcelona. He has already played nearly 30 games in different age groups of the Belgium national team and currently represents the U-19 level.

“Two things were decisive in my choice of joining Anderlecht: the training facilities and the Purple Talents program.”