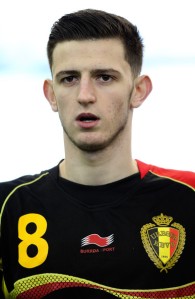 Alper Ademoglu was born in Turkey, but his parents moved to Belgium due to the difficult economic situation when he was a young boy. He started his footballing adventure at KRC Genk, where he quickly became one of the most talented teenagers in country. Many top clubs were showing interest, like Manchester United, Chelsea and Ajax, but in 2013 Alper chose Anderlecht – which seems to be the best option for his career. Although he represented Turkey on U15 level, he is a member and one of the key players of Belgium U17 setup now. He is also part of a very strong generation of Belgian players born in 1998, including, among others Wout Faes, Dante Rigo, Orel Mangala and Jorn Vancamp.

“Ademgolu is a player with great passing skills. He can be decisive with one pass and is able to control the game afterwards. He isn’t yet a fine product like Dennis Praet was at the same age but he’s very mature for his age. This season is very important for the midfielder which could bring him closer to Anderlecht’s A-squad. The fact that Anderlecht doesn’t have someone on the bench to replace Praet could maybe mean that we see him sooner as expected.”

One response to “Alper Ademoglu”