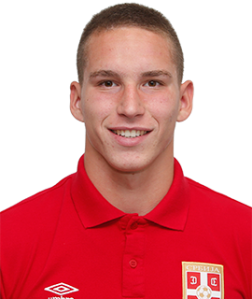 Tournaments participated in: 2015 UEFA European Under-19 Championship qualification elite round (1/0)

– agility, despite his physique

FK Rad youth academy has produced number of talented players in recent years, such as Nemanja Pejčinović, Uroš Đurđević, Andrija Luković and Nemanja Kojić. Boris Radunović is the next “The Builders” graduate tipped to follow in their footsteps. He made his professional debut on his 17th birthday, 26 May 2013, in Serbian SuperLiga match against Radnički Niš, in which he replaced Filip Kljajić after 84 minutes- it wasn’t a memorable debut, though, as Boris let opponents score a goal on him just a minute into the game, however, this didn’t stop his team from winning 3-1. 2014/15 is his breakthrough season – he became a first team regular and gets a great deal of praise for his performances. He is also a regular Serbia youth international and currently represents “Оrlovi” at U-19 level.

“Goalkeeper with excellent potential due to his fantastic mentality, profile and talent. He progresses on a daily basis. He is already very mature because he always takes the right decisions whether he rushes out on crosses, anticipates plays or rushes out on one-on-one duels. He has a tremendous serenity and ball handling, giving confidence to his team. He has excellent reflexes and despite his height, he goes down very quickly on low shots. He is a goalkeeper with great future ahead of him!”