– ability to be a target man for teammates

– efficient in his play and a natural eye for goal

– powerful and accurate shot with both feet 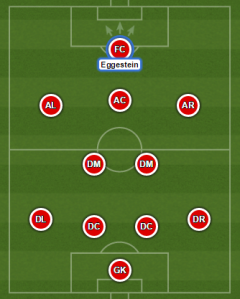 In recent years Werder’s youth system has produced a number of notable players, such as Davie Selke, Levent Ayçiçek, Aaron Hunt and Özkan Yıldırım. Currently, one of the best players stemming from its youth academy is Johannes Eggestein. It’s worthy of note that his older brother Maximilian already made his senior debut for Werder and it is almost certain that Johannes will follow his footsteps next season. During 2014/2015 he scored 22 times in 25 matches for “Die Werderaner” U-17 team, becoming the Bundesliga U-17 top scorer. He was at the 2015 European Under-17 Championship, where Germany showed some great football, but ended up losing to France in the final.