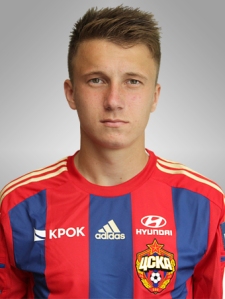 – ability to pass the ball under pressure in breakaway situations

– great control with the ball at his feet

Aleksandr Golovin joined CSKA Moscow youth academy in 2012 from a small club Metallurg Novokuznetsk. In 2013, he was one of the most important players for Russia at UEFA European Under-17 Championship, where young “Sborna” unexpectedly won the title. He made his Russian Football Premier League debut for CSKA on 14 March 2015 in a league fixture against Mordovia Saransk, in which he replaced Bibras Natkho after 72 minutes. On 7 June 2015, after a surprising call-up, he made his debut for Russia senior national team in a friendly game against Belarus at the Arena Khimki, replacing captain Roman Shirokov in the 61st minute and scoring Russia’s second goal of a 4–2 victory 16 minutes later.

One response to “Aleksandr Golovin”