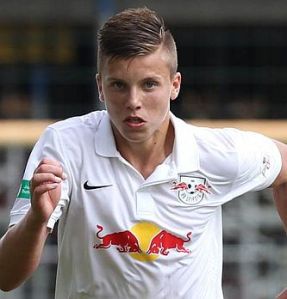 Tournaments participated in: 2015 UEFA European Under-17 Championship qualification elite round (3/1)

– likes sniff out opportunities in and around the box

Ermedin Demirović moved to RB Leipzig from HSV in 2014. Leipzig recently have a reputation for buying very talented young players, such as Federico Palacios Martinez, Lukas Klostermann or Davie Selke, who recently joined “Die Bullen”. Ermedin is a real goalscoring machine – he is one of the top goalscorers in the U17 Bundesliga this season. He is a German citizen and was raised in Germany, but he chose to represent his parent’s country, Bosnia. He is one of the most important players in the U17 Bosnia national team, which fields other great talents such as Zinedin Mustedanagić, Amar Suljić, Nikola Gavrić or Mirza Mustafić.