– rarely loses possession of the ball 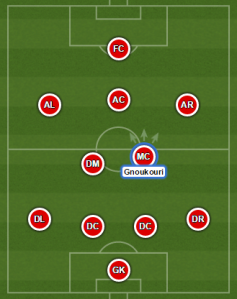 Assane Gnoukouri was part of the Olympique Marseille youth system but was relased in December of 2013. From there he moved to Italy to play for newly established club Altovicentino, in the lower leagues. In the summer of 2014, Assane, along with his younger brothers Zate Wilfried Demoya, Miguel Demoya and Williams Demoya, moved to Internazionale youth academy. He made his Serie A debut for the club on 11 April 2015, when he came on as a substitute for Gary Medel after 80 minutes in 3-0 win against Hellas Verona. He made some impressive performances during the Nerazzurri’s pre-season 2015 and is clearly in Roberto Mancini’s plans given the coach has refused loan offers for him.

“He has the potential to become a great player. Despite his age, he has qualities that not many players have, he never gets anxious and rarely loses the ball.”

BVB U-19 this season:
31/05/2009: 14-year-old Islam Feruz makes his Celtic debut in Tommy Burns' memorial match.
Goalkeepers with the highest 'prevented goals' in Europe's top 5 leagues this season according to Wyscout:
Julián Álvarez last eight games for River Plate:
European U-23 (players born in 1998+) Team of the Week by Football Talent Scout!
Yan Couto for Braga this season:
Loading Comments...
%d bloggers like this: