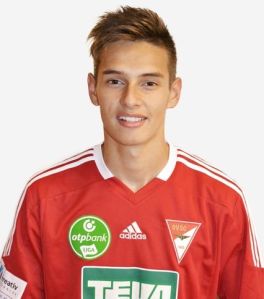 – decent speed, despite his physique

– likes to plays with back to goal

– eagerness to track back and work for the team

– likes to play deep and start out his attacks from there

– great technical ability and confidence on the ball

Hungary are in a football crisis, but despite that, their national team seems to be doing better every year, and there is optimism on the horizon as the youth squads have some of the very talented players on board. One of them is a Debreceni VSC player Nortbert Balogh. He joined his current club from Hajdúböszörmény in 2006 as a 10 year old. His first steps in senior football happened at Létavértes SC ’97 and currently he is cementing his place at DVSC. His style is rather interesting and unorthodox for a player like him: he is extremely good technically, he likes to dribble and feels very good with the ball at his feet, which is unusual because he is almost 2 meters tall.

One response to “Norbert Balogh”