– courageous, tenacious and eager to sacrifice 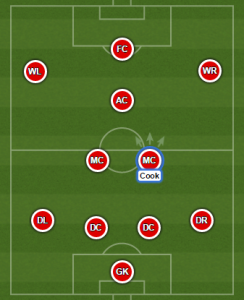 Lewis Cook is a product of Leeds United youth system – academy known for having produced and still producing many great players such as Alan Smith, Ian Harte, Harry Kewell, Paul Robinson, James Milner and Jonathan Woodgate. Lewis was playing for the Leeds under-18s team when he was just 15 years old. He made his first team debut for LUFC in the first game of the 2014/15 season, coming on in the 64th minute against Millwall. He made his first start on 12 August 2014, starting the League Cup match against Accrington Stanley. In April 2015, he was named the Championship’s Apprentice of the Year. He was part of the England under-17 squad that won the UEFA European Under-17 Championship 2014 in Malta, starting three of England’s five games including the semi-final and the final. He is considered to be one of the most talented players from English 1997 generation, along with Patrick Roberts, Dominic Solanke, Isaiah Brown and Adam Armstrong.

“Yet after 37 Championship appearances in his debut season – 33 of them starts – Cook’s maiden year was talked about in a higher regard than both of the aforementioned names. The tangible recognition arrived in force: Cook was named the Championship’s Apprentice of the Year in April, Leeds’ Young Player of the Year by the Yorkshire Evening Post in May and, later on that month, the runner-up to Alex Mowatt as the club’s official player of the year.”