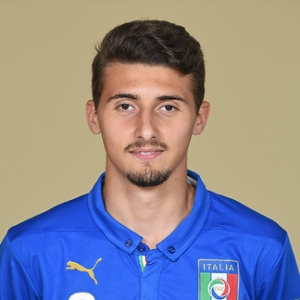 The AC Milan youth system is famous for having produced many great Italian internationals, including the club’s top three all-time appearance makers Franco Baresi, Paolo Maldini, and Alessandro Costacurta. Andrés Llamas is another graduate who could break into Milan’s starting XI in the near future. He didn’t make his senior team debut yet, but was already an unused substitute in Milan’s 3–2 away win over Udinese on 22 September 2015. He was the captain and one of the leaders of Italy at the 2015 UEFA European Under-17 Championship, but unfortunately young “Squadra Azzurra” were knocked out at the quarter final stage after 3-0 defeat against eventual champions France. Currently, he is a member of U-18 setup.

“Andres Llamas is an Italian Youth International in the Milan Academy who is capable of playing any of the roles in the back four. Most adept at taking on a flank, Llamas is one of, if not the most solid full-back coming through the system since Mattia De Sciglio. Positionally intelligent, Llamas can hold an entire flank should his winger cut in-field and is cognizant of the space in behind himself, rarely allowing his opponent a direct lane to goal. Fully capable of scoring goals from defense, Llamas has notched two goals in seven appearances for the U-16 and U-17 Italian sides.”

One response to “Andrés Llamas”