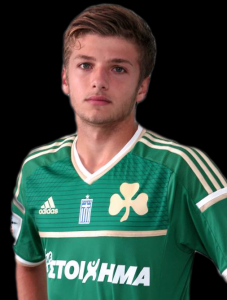 Tournaments participated in: 2014 UEFA European Under-17 Championship elite round (3/0)

– versatile player capable of playing anywhere along the front-line

Lazaros Lamprou began playing football at the age of 5 for local club A.E.Pontion Katerini. In 2011, Panathinaikos – the club he has supported since childhood – spotted his potential and invited him to join their youth academy. He made his professional debut on 28 October 2015 in a Greek Cup match against APO Levadiakos, when he came on as a substitute for Viktor Klonaridis for the last eleven minutes. In 2014, was the only Greek player to feature on a list entitled “TOP 40 young talent in world football – born in 1997″ by The Guardian.

“Lampros is a right footed player but with can as well play with his left foot. He can play in all behind forward positions but as a center for as well. This is due to his excellent sense of the space around the “nets”. Additionally because of his height, he is quite tall for his age, and by taken advantage of careful positioning in the “nets” area he scores quite a few times with his head.”

Euro U-19: the best players according to InStat Index:
Romeo Beckham provided 5 assists for Inter Miami reserves in the MLS Next Pro this season.
Carney Chukwuemeka at Euro U-19:
Euro U-19: Team of the Tournament by Football Talent Scout!
Spurs' attacking options AT the moment:
England are the European U-19 Champions 2022! 🏴󠁧󠁢󠁥󠁮󠁧󠁿🏆
Loading Comments...
%d bloggers like this: