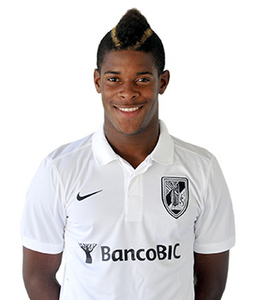 – known for his explosive acceleration, and his dribbling ability at speed

Alexandre “Xande” Silva is a son of former FC Porto and Rayo Vallecano player Quinzinho. He is a product of a famous Sporting CP youth academy, but in 2014, quite unexpectedly, moved to Vitória Guimarães. On 13 September 2014, Xande made his senior debut with the B-team in the second division, playing 14 minutes in a 0–1 loss at União Madeira. On 18 January he scored his first goal in the competition, contributing to a 4−1 success against Benfica B. He made his first official appearance with Vitória’s main squad on 17 May 2015, coming on as a substitute for Otávio in the 79th minutes, in a 0-0 draw against Benfica. He has Angolan roots, but has been a youth Portugal international since 2012. He’s already managed to get nearly 45 caps for the various youth teams. The wider world first heard of him at the 2014 UEFA European Under-17 Championship, in which young “Selecção” made it to the semi-final, but got knocked out by eventual champions – England.