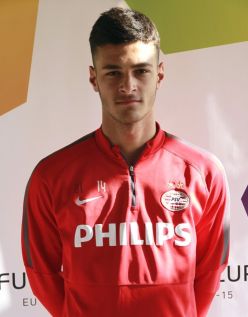 – likes to come deep to recieve the ball

– likes to hold the ball up and link play

– very cool in front of goal

– often uses his creativity to set up goals for his teammates 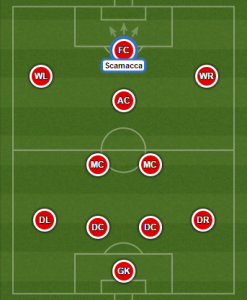 Gianluca Scamacca started his career at Lazio, after which he moved to AS Roma. At the age of 16, in January 2015 he made an unusual step for an Italian player – he moved to PSV Eindhoven academy. The decision, although controversial, appears to be correct, as Eindhoven have been very good at producing fantastic players, while PSV coaches are not afraid to give the youngsters a chance – so if Gianluca’s progress is adequate, very soon we should see him in the Eredivise. It is worth noting that at just 17 years of age, he has 30 caps in the youth Italian national teams as well as the 2015 European Under-17 Championship tournament under his belt, where he was the youngest member of the Squadra Azzurra. Furthermore, it is worth mentioning that he is often compared to PSG superstar Zlatan Ibrahimović

“Gianluca sees Netherlands as the best country to develop as a young player. He is physically strong and pretty skilful for a guy as tall as him. He scores a lot of goals, both at club level and internationally.”