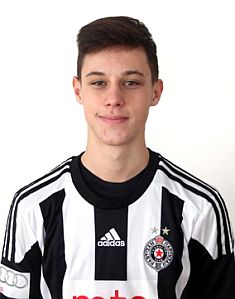 – intelligent midfielder with a wonderful range of passing

– likes to exploit spaces between defensive and midfield opposite lines

Veljko Birmančević is a product of Partizan Belgrade youth system – one of the strongest developmental academies in the eastern Europe, Partizan’s academy has churned out stars over the past 15 years. Adem Ljajić, Lazar Marković, Aleksandar Mitrović, Stevan Jovetić and Miralem Sulejmani all had their careers begin with the Belgrade club. Veljko is regarded as one of the most promising Serbian youngsters born in 1998. He signed his first professional contract with Partizan on 12 February 2016 and made his official debut just one week later, on 21 February 2016 in a 1-2 away defeat against OFK Beograd.