Tournaments participated in: 2015 UEFA European Under-17 Championship qualification elite round (3/0)

– very good sense of positioning while receiving through balls

– known for his dribbling skills and close control in limited spaces, as well as decent ability to protect and hold up the ball for team-mates with his back to goal

– known for his speed, turn of pace and mobility 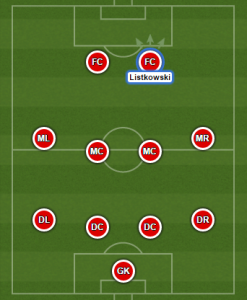 Marcin Listkowski’s hometown club is Lech Rypin. In the beginning of 2014 he joined the youth team of Pogoń Szczecin. In April 2015 he was moved to the first team and his professional debut came on 31 May 2015 against Lech Poznan in the Polish Ekstraklasa. He has been a Polish international for many years now – he started in the U-16 side and is currently a key player for the U-19 team.