– often cuts inside on his right foot to move to a more central attacking position, and uses uses his speed and skill to take on defenders until he finds the space to make an attempt on goal

– known for his dribbling skills, speed, turn of pace, mobility and close control in limited spaces 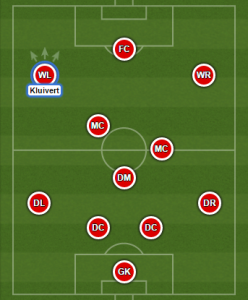 Justin Kluivert is a son of famous Patrick Kluivert – former Ajax, AC Milan and Barcelona player and a true icon of Dutch football. The young winger’s dream surely is to follow in his father’s footsteps and play in the Ajax first team, but at this point, he has to be content with his star status in the U17 team. Justin was born in Zaandam while his father was playing in Spain. He has been at Ajax since he was just six years old, and has already won caps as a youth international, representing Holland at U15, U16 and U17 level. In April 2016, aged only 16, he signed his first professional deal with Dutch giants.

“Justin does not seem worried about comparisons to his father. After playing for Holland’s youth team last year, the teenager posted a picture from the game to his Instagram, placed alongside one of a young Patrick representing the Dutch side, while another post showed a picture of Kluivert Snr at Barcelona and the caption ‘I have to keep the name big’.”