– should improve his defensive positioning

– versatile player who is naturally adept in several positions, and is capable of aiding his team defensively as well as offensively

– player with very good reading of the game, reactions and anticipation

– endless energy coupled with his physical strength and powerful running make him an incredibly useful asset as he brings an offensive value to a team, with a lot of activity during 90 minutes in the left side

– plays with a great deal of confidence, and is solid in the air for a left back 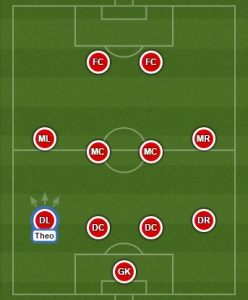 Theo Hernández is the son of former Atletico Madrid centre-back Jean-François Hernández and brother of Lucas – very talented defender, already a member of Atletico’s first team. Theo is set to join his older sibling in Diego Simeone’s side after impressing as part of Atletico highly successful youth teams. Recent Spanish media reports have claimed that Barca wants to buy him. It seems, though, that he’ll be better off staying with Atletico and trying to replace Filipe Luis at the left-back spot in the near future. He’s also a member of France’s youth squad and currently represents Les Bleus U19, which will soon play at the European U19 Championship, scheduled to go off on July 11 in Germany.