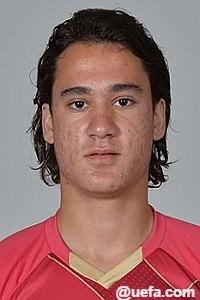 – very composed on the ball

– despite his height, he is able to win headed duals due to his jumping technique

Strahinja Bošnjak is another brilliant graduate of the Partizan Belgrade youth academy, which already produced many excellent players in recent years such as Lazar Marković, Adem Ljajić, Stefan Šćepović, Aleksandar Mitrović, Ivan Šaponjić and Andrija Živković. From an early age, Strahinja has been considered to be highly talented, and thanks to his modern play style and elegance, he raised interest even within FC Barcelona. Partizan isn’t afraid to place their trust in their most talented graduates, for instance, Dušan Vlahović from the class 2000 plays there on a regular basis, so it’s quite possible that Strahinja will soon get his chance to debut too. He is also a regular player for the Serbian junior national teams, he has represented his country at the U-16 and U-17 levels. In 2016, he captained his team at the European U-17 Championship, where Serbians failed to advance from a very tough group containing Spain, Netherlands and Italy.