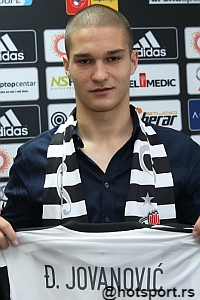 – determined forward with killer-instinct, good technique on the ball, decent dribbling skills and cleverness at his off-the-ball movements

Djordje Jovanović is considered as one of the most talented products of Partizan’s youth academy in recent years. He was a true goal scoring machine in youth Partizan teams. In the summer 2015 he signed his first professional contract. Several months later he joined the first team squad and got the jersey number 99. Partizan’s officials and fans dream that in the not-too-distant future Djordje will create a lethal attack with another extremely talented Partizan youth graduate Dušan Vlahović. He is also a regular player for the Serbian junior national teams, he has represented his country at the U-16 and U-17 levels. In 2016, he played at the European U-17 Championship, where Serbians failed to advance from a very tough group containing Spain, Netherlands and Italy.