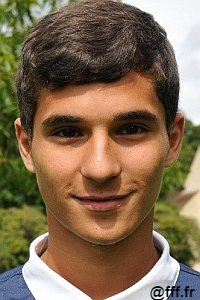 – tends to be a little selfish when on the ball

French championship U-19 runner-up with Lyon.

Houssem Aouar is a product of Olympique Lyonnais youth system – famous and successful academy, which already produced many excellent players in recent years such as Nabil Fekir, Karim Benzema, Hatem Ben Arfa, Samuel Umtiti, Maxime Gonalons and Alexandre Lacazette. Houssem is the next one tipped for big things after impressing in youth teams. In July 2016, he signed his first professional contract with Lyon, snubbing approaches from Liverpool and Arsenal in the process. On 24 September 2016, he was called up to the senior team by manager Bruno Génésio and appeared on the bench in the team’s 1–0 defeat against Lorient. It seems to be only a matter of time before he makes his Ligue 1 debut and takes the game by storm.

‘Houssem has a technical ease and good vision that allows him to see quickly.

He has both feet, can speed up the game, but also can keep the ball at his feet when necessary and has ability in one-on-one situations.

He can play as a second striker or a playmaker or a runner, and is a quality finisher, capable of scoring and threading the final pass.’