– needs to improve his strength to endure strongest players

– despite being tall, his heading ability could still improve

– thanks to his vision and anticipation he is capable of playing in a variety of midfield roles, in an advanced position or in a defensive role if needed

– known for his movement, positional sense, ability to interpret the game, pace, mobility and energy

– provides dynamism to the team’s build up process

– often makes pacy, energetic runs with the ball through the middle

– good ability at first touch/high speed in 1-2 combinations style of play thanks to his technique, pace and ball control 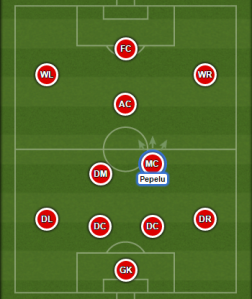 Pepelu joined Levante youth academy from a small club Denia. In 15/16 season this intelligent midfielder played in 30 games and scored four goals for Levante B side. On 15 December 2015 he made his first team debut, replacing Juanfran in a 1–2 Copa del Rey away loss against RCD Espanyol. His league debut seems to be only a matter of time, especially considering the fact that Levante got relegated to Segunda Division. He also represents his country at the youth level and is currently one of the leaders of Spain U-19 national team.