– could be a little bit more agressive, intense and consistent

– versatile player who is naturally adept in several positions

– likes to be fielded in a free role as an attacking central midfielder, where he is given space to roam the pitch 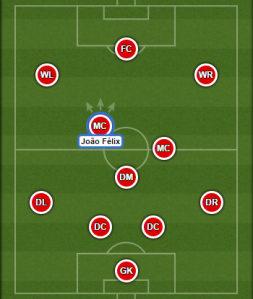 Portugal has currently an outstanding generation of young football players, which achieve great successes at various youth international tournaments. João Félix is definitely one of the most talented ones. He is a former FC Porto player who joined Benfica youth academy in 2015 from Padroense. He made his professional debut on 17 September 2016 at the age of 16 for Benfica’s reserve team, as a substitute, in a goalless draw at Freamunde in LigaPro, becoming the youngest player ever to play for Benfica B.