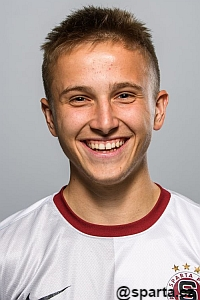 – versatile player who is naturally adept in several positions

– likes to be fielded in a free role as an attacking central midfielder, where he is given space to roam the pitch

Christian Frydek comes from a very sport-oriented family. His father Martin was a very good footballer – an international of Czech Republic, while his older brother, Martin Junior, is also a Sparta Prague player. Christian is considered to be one of the most talented young players in Czech Republic. He made his professional debut for Sparta at the age of 17, on 4 May 2016 in a Czech Cup game against FK Jablonec. He made his league debut half a year later, on 20 November against MFK Karvina. In 2016, he was the only Czech player to feature on a list entitled “TOP 60 young talent in world football – born in 1999” by The Guardian.

‘The Frydek family is certainly doing something right. Martin Frydek Sr has his Euro 96 silver medal in a drawer at home while Martin Jr would have gone to Euro 2016 with the Czech Republic had he not suffered an injury before the tournament. Now the attention turns to Christian, seven years younger than Martin Jr, as he prepares to make the step up to Sparta Prague’s first team. He is a hard-working midfielder but also – just like his father – a very skilful player, a creative playmaker with a great football brain who can come up with the unexpected in every situation. “He has to work on his strength, though,” says Frydek Sr. “And I would like him to impose himself on games more. There are passages when you don’t notice him on the pitch.” Recently Frydek has been receiving some great advice in training. “He got called up to train with the first team last week and every day when he came home, all I heard was Rosicky this and Rosicky that,” says his father. When the former Arsenal playmaker retires, Sparta may well already have a successor in their ranks.’