– thanks to his vision, great collective work rate and anticipation he is capable of playing in a variety of midfield roles, in a defensive midfielder position or in a more advanced role if needed

– skilful on the ball and calm under pressure

– provides many key interceptions, clearances and tackles for his team throughout the matches 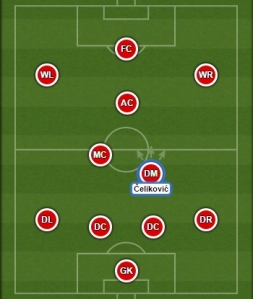 Jasmin Čeliković is a charismatic midfielder who is considered to be one of the most talented young players of his generation in Bosnia and Herzegovina. He was born in the Bosanska Krajina city Bihać in western Bosnia and Herzegovina, but moved to Croatia as a young boy. He joined HNK Rijeka youth academy in 2015 from NK Zagreb. He made his professional debut for Rijeka on 11 December 2016 in a league fixture against RNK Split. He is also a regular player for the Bosnian junior national teams, he has represented his country at the U-16, U-17 and U-19 levels. In 2016, he captained his team at the European U-17 Championship, where young ‘Dragons’ failed to advance from a very tough group containing Austria, Germany and Ukraine.