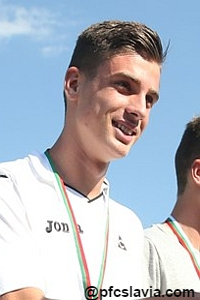 Tournaments participated in: 2015 UEFA European Under-17 Championship qualification elite round (3/0)

Slavia Sofia is a club with grand traditions, but it has not enjoyed any success in recent times. Previous season was very decent, however, and Slavia finished 4th in the table. Currently the team has given a chance to young, talented players such as Antonis Stergiakis, Stefan Velkov, Yanis Karabelyov, Georgi Yomov, Nasko Milev, Kaloyan Krastev and Petko Hristov. The latter one is considered to be one of the most talented defenders in Bulgaria and all of the Balkan regions. He joined Slavia in 2013 from local rivals Levski Sofia. He made his professional debut on 30 June 2016 in Europa League game against Zagłębie Lubin, coming on as a substitute for Georgi Yomov. In 2016, he was named young player of the year in Bulgaria. He has a twin brother Andrea, who also is a talented defenders and plays for Slavia.

‘Petko is a strong center back, with good technical skills to start the game from defense, a good header and tackling skills. Petko has a good vision of the game, a good positioning in the field. He’s the leader of the defense.’

One response to “Petko Hristov”