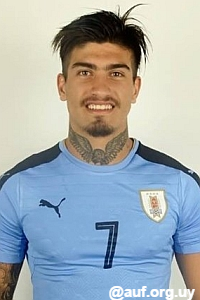 Joaquín Ardaiz is one of the most talented players of Uruguayan generation, that won 2017 South American Youth Football Championship in great style. Others worthy of note include Santiago Bueno, Nicolás De La Cruz, Rodrigo Bentancur, Rodrigo Amaral and Nicolás Schiappacasse. Joaquín made his professional debut for Danubio on 14 February 2016 against CA Cerro. His talent didn’t go unnoticed and he was already linked with some of the best clubs in Europe, including Barcelona, Real Madrid, Manchester City, Liverpool and Porto.

‘The English and Spanish press have taken it upon themselves to dub Ardaiz ‘the new Luis Suarez’, a comparison that’s only really accurate in that it acknowledges the two are both strikers and were born in the city of Salto, in the north-west of Uruguay. However, they are stylistically different and unlike Suarez, who moved to Montevideo because of his family, Ardaiz moved to Montevideo because of football.‘

Álvaro Rodríguez's goals at Sudamericano U-20:
Teams qualified for the UEFA Youth League round of 16:
TALENT OF THE DAY
What an awful day for Italian teams in the UEFA Youth League:
England U-17 at the Syrenka Cup back in 2019.
Paris Brunner 22/23:
Loading Comments...
%d bloggers like this: