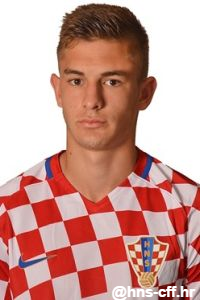 – likes to be fielded as a defensive midfielder, who looks to occupy the gap between the defence and midfield

– thanks to his vision, great collective work rate and anticipation he is capable of playing in a variety of midfield roles in a defensive midfielder position or in a more advanced role if needed

– skilful on the ball and calm under pressure

In recent years, Dinamo Zagreb’s youth academy has been going through some great times when it comes to talented players. Fresh examples like Ante Ćorić, Josip Brekalo, Nikola Moro, Filip Benković and Borna Sosa serve only to confirm this. Surely, one of the most interesting U-17 prospects now is Bartol Franjić. He showed himself to a wider crowd at the 2017 European Under-17 Championship, where young Croats were a massive disappointment and got knocked out already in the group stage despite high expectations.