– striker with killer-instinct, interesting technique on the ball, decent dribbling skills and cleverness at his off-the-ball movements

– can be also deployed as a winger or second striker thanks to his pace, mobility, dribbling skills and technique 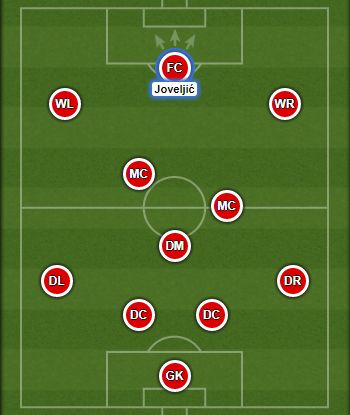 Dejan Joveljić is a product of famous Crvena Zvezda Belgrade youth academy. He is yet to make his professional debut, but thanks to his great form for Red Star U19, he was named on the first-team bench for the first time on 22 October 2017 in a Serbian SuperLiga fixture against Mladost Lucani. He is also a regular youth international for Serbia, where he started at U-16 level and currently plays for U-19. It is worth noting, that he has already played over 30 games for the national teams in total.

“Compared to Inter’s Mauro Icardi, the striker is very mobile and a lethal finisher who has been making waves in the Red Star academy since joining from Sloga United in Bijeljina, Bosnia & Herzegovina. Curiously enough, he shares a hometown with Luka Jovic, the Guardian’s Next Generation pick from two years ago, who is now at Benfica. Joveljic can also play on the wing and has scored nine goals in his 14 appearances for Serbia’s Under-17s. His senior debut for Red Star is just a matter of time.”