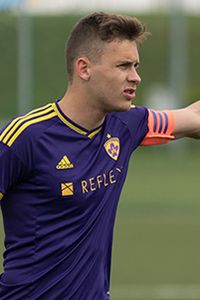 – should focus on the technical improvement

– complete striker who is able to create and score his own goals, or to act as a target man and also an off-the-shoulder striker

– tall and fast for his height

Nino Kukovec is considered to be one of the most talented teenagers in Slovenia. This young target man is already on the radar of several big European clubs including Italian Fiorentina. He is a regular youth international for Slovenia. Currently, he is the captain and one of the leaders of Slovenia U-17 national team.

One response to “Nino Kukovec”