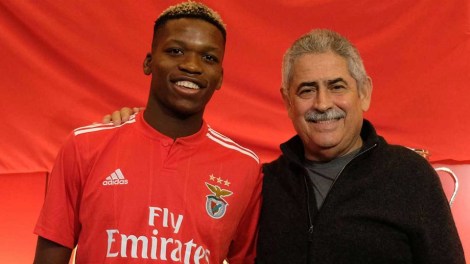 Since Bruno Lage is the coach of the main team, we have seen a different Benfica. The team has been improving, and thah is a result of several training sessions, and a squad that is aware of the ideas of the coach. The youth academy has been one of the main bets of Luís Filipe Vieira, president of the club, and Bruno Lage seems to be the perfect man for this project.

One of the players of the youth academy that has been featured is Florentino Luís. The Portuguese is 19 years old and has been in Benfica since 2010, where he did all his formation. He is a defensive midfielder with good physical capacities, but specially technicals. Florentino is part of the Golden Generation of Portugal, which won the UEFA European Under-17 championship in 2016, and the UEFA European Under-19 championship in 2018. Florentino began this season in Benfica B, which plays in the Portuguese Second Division, where he played 20 times. He also competed in the Youth League, having played 5 games.

How he has played

Bruno Lage called Florentino for the main team in January, but it was only on the match against Nacional, in February, that the midfielder debuted. He played the last 30 minutes and was one of the highlights of the team: Missed only two passes in 30 and made 6 tackles, more than any other player in the field.

Florentino was on the starting eleven in the game against Galatasaray, for the UEFA Europa League. In Benfica’s victory for 2-1, the midfielder was the MOTM of the “encarnados”. Made two key passes, won two defensive aerial duels in four, recovered seven times the possession of the ball, made five tackles and six interceptions (more than any other player).
It was again in the starting eleven in the game against Desportivo de Chaves and made another excellent match. The midfielder failed six passes in 72, recovered 10 times the possession of the ball and made 10 defensive actions. In this game Florentino played more offensive and near the box. He suffered three fouls, all in danger zones.

How he plays: attributes

Florentino is a defensive midfielder that fills the entire midfield. He’s always well positioned, has the perfect insight where he is on the field, and is always a pass option for colleagues. Defensively he is very good, it’s usually one of the players with more tackles and recoverings of possession of the ball. In addition to this, he does very well the covers, that is, when a center back moves forward to start the first phase of construction, Florentino covers his space not to create imbalances. The same goes for the full backs. With his mobility and speed, Florentino is able to occupy more lateral positions in order to fill the space left by the full back when they attack. He’s a player who passes the ball very well, has a high percentage of pass accuracy, and with his tackles or interceptions, he manages to create imbalances in the opponent defense and initiate an attacking play.

How he plays: weaknesses

With only 19 years Florentino still has a great margin of progression. There are aspects that still have to improve in his game. Therefore, he needs more rhythm and more minutes at high level to develop. Even though he’s a midfielder with defensive characteristics, he should improve at the offensive moment: Has all the physical and technical capabilities to become an excellent number 8. Many of the passes he makes are simple, rarely he makes long or vertical passes. His mentality is good, so it hardly loses possession of the ball, but, on the other hand, if he seek to risk he’s another player at the time of offensive construction and creates imbalances in the opponent with long distance passes. If he’s looking to play up on the field, he can be one of the responsible for the key pass. He may even appear in finishing zones. With time, training and with certain improvements, Florentino can become a very complete midfielder and be one of the future stars to represent Portugal.