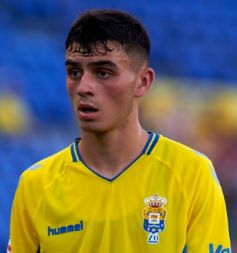 Transfer Rumors: None (Already signed for Barcelona for 5M€)

Physicality, Decision making (forces the ball sometimes, both in dribbling and passing).

– Versatile attacking midfielder who can play out wide as well.

– Variety of Skill moves and tricks

– Good crosser of the ball

– Works hard in both defense and attack

“He has something special…It’s been a long time since I’ve seen a player like that here.” These are the words of Jonathan Viera, at his presentation in August, describing 16 year-old Las Palmas player Pedri.

The rise of 16-year-old Pedri has been one of the most unexpected stories of the 2019-20 season so far. Pedri is the face of a new Las Palmas side that is full of young players such as Kirian Rodríguez, Josep Martínez, Fabio González, and Cristian Cedrés. However, it hasn’t always been clear that Pedri would be an attraction at a big club. Despite standing out from kids with his skill, always playing with kids older than him, at around age 12, hometown club CD Tenerife turned down the chance to sign Pedri apparently telling the player he was “too small” and “too skinny”. Instead, Pedri signed for the biggest club on Tenerife’s neighboring island; rivals UD Las Palmas. When Pedri first joined (2018), he was assigned to the Juvenil B side but a mere four matches later, he was moved to the Juvenil A side where he finished the season. Las Palmas manager Pepe Mel surprised everyone by taking the 16-year-old to do the preseason with the first team, where Pedri stood out, with electric dribbling, ambidexterity, and forward passing. His magnificent preseason earned him a spot on the first team, completely bypassing the B and C teams starting in the first match of the season. Apparently, after seeing Pedri play in a preseason match against Almeria, Barcelona made a formal transfer offer to Barcelona. Barcelona beat out a host of other clubs in Europe (Liverpool, Manchester City, Chelsea, Valencia, Sevilla, and Real Betis all showed interest or offered) with an offer of 5 million Euros that could rise up to 25 with variables. Immediately loaned back, Pedri has played with a maturity level far above that of his age, playing like a seasoned veteran in the tough Spanish Second division. Pedri’s partnership with Las Palmas academy graduate Jonathan Viera has created one of the strongest attacking duos in the league. Above all, Pedri’s personality stands out the most; he’s is a “super quiet boy” who always “did things that were not very normal” in football according to his dad. A bright future awaits the small and quiet 16-year-old, turned down by his hometown club, Pedri has been called up to Spain’s U-17 World Cup squad, where he looks set to star in.