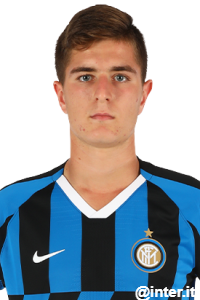 – fairly good coordination, pace, and agility for a player of his size, but he still may struggle a bit in front of skillful players with fast direction shifts/great acceleration skills at short distances

– feels comfortable and has a good composure on the ball, making part of the team’s build-up process in the first instances

– able to play in a three-man defensive line system, especially as a left centre-back

– known for his composure, elegance, ball-playing ability, and confidence in possession

Pirola feeling very comfortable in a three-man defence as a left centre-back.

Pirola with a great timing tackle.

Lorenzo Pirola is a product of the Internazionale youth academy. He is one of the leaders of a very talented generation of Inter academy players born in 2002 which includes, among others Sebastiano Esposito, Riccardo Boscolo Chio, Lorenzo Moretti, Gaetano Oristanio, Nicholas Bonfanti, Niccolò Squizzato, and Filip Stankovic. Despite being only 17, he has played over 35 games for Italian youth national teams and represented his country at 2019 UEFA European Under-17 Championship and 2019 FIFA U-17 World Cup.

One response to “Lorenzo Pirola”