– movement with and off the ball

– still has a margin to improve the quality of his crosses

– very good agility, strength, and coordination, with great pace at all distances

– endless energy and his powerful running make him an incredibly useful asset as he brings an offensive value to a team, with a lot of activity during 90 minutes on the right side

– courageous, tenacious and willing to sacrifice

Estevez cuts inside and plays a great through ball to assist his teammate. 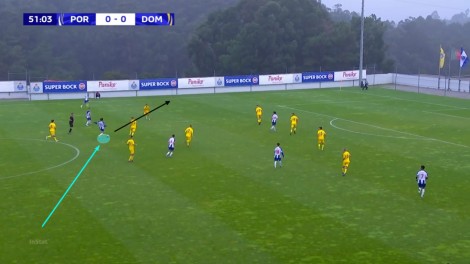 Estevez cuts inside into midfield and plays a great through ball to the left-back. 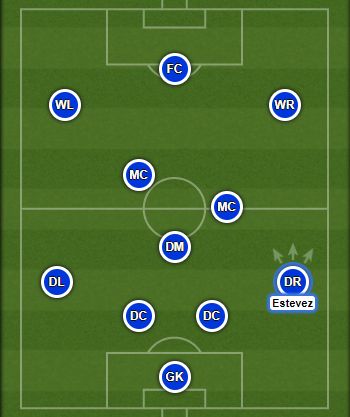 Tomás Esteves is a product of FC Porto youth academy. He is a part of a new wave of highly talented Porto teenagers which includes, among others Fábio Silva, Romário Baró, Fábio Vieira, Vítor Ferreira, Afonso Sousa, Francisco Conceição and Levi Faustino. During the 2018/2019 season, he was an important member of the team that won the UEFA Youth League. He made his first-team debut on 5 December 2019 in Taça da Liga game against Casa Pia. He is also a regular Portuguese international and despite being only 17 he already made his debut for Portugal U-21 team.

“Has been with Porto since 2011 and was promoted to the first team this season. He was given the legendary No 2 shirt, which has been worn by captains João Pinto, Jorge Costa and Bruno Alves in the past. He was a member of the team that won the Uefa Youth League last season and is a player that has a seemingly inexhaustible energy. His technical ability is superb and he is also tactically intelligent and a modern right-back in the way that he can stay wide but also go inside to find space if needed.”

One response to “Tomás Esteves”