– ambidexterity/playing with his right weaker foot

– very good agility and coordination for a player of his size

– quick despite being so tall, which allows him to make dynamic dribbling movements and cover large amounts of space

Sučić with a great run through the middle – he dribbles past two opponents and sends a brilliant pass to his forward. 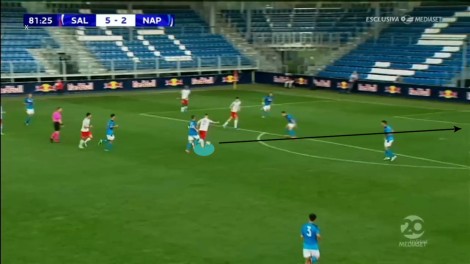 Sučić with great ball control and a superb goal from distance.

Luka Sučić joined RB Salzburg youth academy from Union Edelweiß Linz in 2016. On 14 September 2019 he made his professional debut for Salzburg’s feeder team FC Liefering in the Austrian second tier – a team with many talented players such as Adam Stejskal, Bryan Okoh, Maurits Kjaergaard, Nicolas Seiwald, Benjamin Šeško, Peter Pokorny, Csaba Bukta, Luis Phelipe, and Karim Adeyemi. Despite being born in Austria he decidedto represent Croatia and currently he is one of the stars of ‘Hrvatska’ U-19 national team.