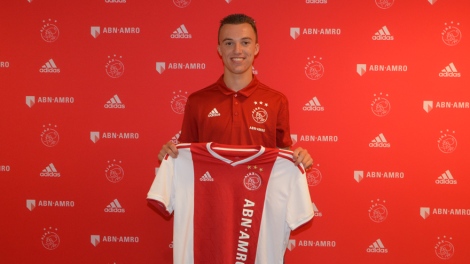 Youri Regeer participated in a trial for one of the youngest teams at the club, but at that moment he wasn’t invited to join the academy. Via two other clubs (SV Zandvoort and Rijnsburgse Boys) he impressed during his time at ADO Den Haag and the National Team (U14) training sessions. In the summer of 2017 he joined Ajax’ academy.

In the U15’s, he almost immediately became a key player and he was named one of the captains of the team. Those would be the first signs of his impressive advance. He developed well and after 8 months he made – as 14-year-old talent – his U16 debut. He did so well that he joined the U17’s after the summer, instead of joining the U16’s. As youngest talent of the group he became a starter and a one of the key players. At the end of the 2018-2019 season he made his U19 debut already. At the end of the season the U19’s won the U19 League and the U19 Cup, so his first games were really important ones as well. Once the season was over, Regeer signed a three-year contract, two months before he turned 16.

Exactly as the year before, Regeer was promoted to a higher team already. He joined John Heitinga’s U19’s squad. When the season (2019-2020) started, he was still 15 years old. And again, he immediately became an important player for the team. This time he played in a different role as before. It can be seen as similar to that of Donny van de Beek in the first team. And that role fits him like a glove. He played better and better, but stayed in the shadow of key players such as Naci Ünüvar and Sontje Hansen. In 18 matches for the U19’s he scored 8 goals (2 assists), becoming the top scorer of the team. He also became Ajax’ top scorer of the UEFA Youth League (joint 3rd place top scorer of the UYL).

In May 2019, Netherlands U17 became (back-to-back) EURO U17 champions. The team remained more or less the same as they prepared for the World Cup U17 (October/November 2019) in Brazil. But Regeer caught the attention of national team (U17) coach Peter van der Veen. Again he showed himself during the pre-training camp and knew he would join the U17 squad to Brazil.

Regeer is a team player. The role suits him perfectly, especially as a number 10. During the UEFA Youth League matches, a few promoted players got back into the team. These were players like Kenneth Taylor, Quinten Timber and Liam van Gelderen. Regeer remained his place in the team, but sometimes in different positions. Against Valencia U19 (in Spain), he played as a winger, scoring three times. In France against Lille U19, he played as a right-back (in a 1-2-3-4-1-system), so he could help the team in the build-up early. After Sontje Hansen went off injured, the team changed and Regeer played as midfielder the rest of the match. In the end, that is his best position, but it shows his versatility and the team player he is.

Also during the World Cup U17 he showed that he can play in more different positions. At the start he was on the bench, but the other 6 matches he was a starter. After three matches, he played – because of a suspended player – as a centre-back. And again he played really well and stayed there for the rest of the tournament. A few days after the World Cup he felt good enough to play, so he did. With a goal and an assist he showed his value for the team.

In February (2020), Regeer was – after a short injury – rewarded for his development with his Ajax U21/pro debut. With his debut he became the 4th youngest debutant for the U21’s. Only Ryan Gravenberch, Kenneth Taylor and Naci Ünüvar were younger when they made their debut. He played 3 matches for the U21’s so far. Due to the Corona-lockdown, the season finished early. This summer he is part of the U21’s to prepare for the new season.