Louis Munteanu in Football Manager 2020 by Darren from FootballManagerStory

Louis Munteanu is an 18-year-old Striker capped at youth international level for Romania. Rising through the ranks of Viitorul Constanta, Louis made his debut in 2019 scoring 3 goals in Liga 1 impressing head coach, Hagi.

Munteanu is well known to Football Manager fans as an athletic forward, with deadly instincts and bags of potential. Raw speed compliments great balance and agility enabling a variety of roles. He can be dangerous on the defensive shoulder or an asset in the channels while possessing the technique to play as a false nine. 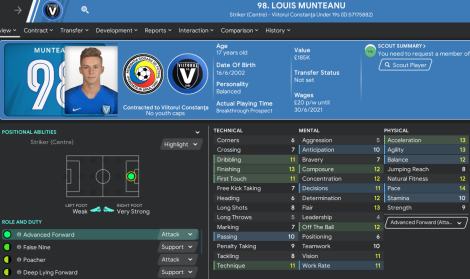 A cultured player with great movement, flair and vision Munteanu can drop deep but lacks the physicality to hold up play so may be better deployed in behind and facing goal.

With good composure, decision making skills and work rate he is very mature for such a tender age. Upon loading FM20 the Romanian can be signed for less than £1 million rising to more than £5 million after just six months, a price Liverpool could not resist during 2021.

The Merseyside club loaned Louis out to fellow Premier League outfit Bournemouth where he scored 4 goals from 11 starts. Two further spells on loan – this time in France – returned 45 goals from 73 appearances.

Munteanu developed into a world-class striker and now aged 23 competes for first-team football on the biggest stage. You could describe 2026 Munteanu as a more rounded version of Timo Werner; such balance, agility and raw speed led to 13 goals in 27 senior International appearances before his 23 rd Birthday. 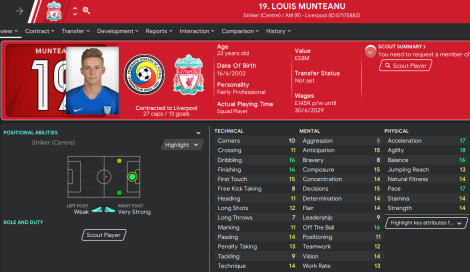 With a market value of £58 million and staggering weekly wage of £145K per week Louis could walk in the footsteps of Gheorghe Hagi. This simulation ended in 2026, just shy of his best years, but I expect Munteanu to return as one of the best Football Manager 2021 wonderkids.