– could improve his shot from distance

– his stamina, work rate, mobility, determination, agility, and pace enable him to cover a lot of ground ground

Antunes outpaces his opponent and wins the ball back. 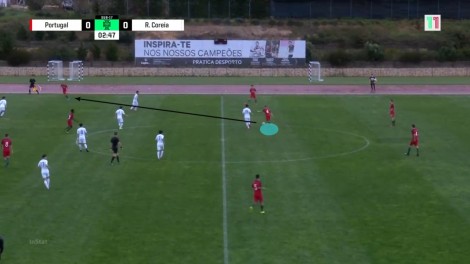 Antunes in his natural role – he receives the ball from defenders and starts the attack of his team.

Tiago Antunes joined FC Porto youth academy from SC Braga in 2016. He is part of a very talented generation of Portuguese players born in 2003 which includes, among others Leandro Dias, Gustavo Mendonça, Diogo Abreu, Ronaldo Camará, Rodrigo Gomes, Joelson Fernandes, Matchoi Djaló and João Resende. Tiago is also a regular Portugal youth international and currently he is the captain and leader of Portugal U-17 national team.