– knows how to dictate tempo, he’s creative and has the natural ability of an ‘orchestrator’ midfielder who can perform at all of midfield positions, linking up the team’s midfield and attack

After a superb combination with his teammate, Jóhannesson provides a great assist.

Jóhannesson shows his passing and vision – he provides a superb assist to his teammate. 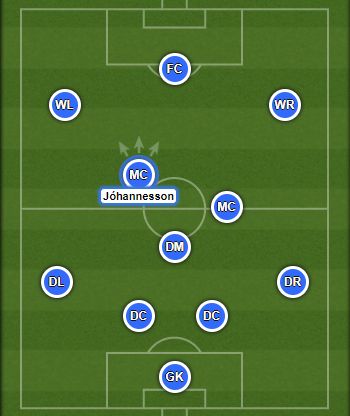 Ísak Bergmann Jóhannesson moved to IFK Norrköping from ÍA Akranes in 2019. He is considered to be the most talented Icelandic teenager at the moment. Ísak is the son of Jóhannes Karl Guðjónsson, former international. His cousin through his mother is Oliver Stefánsson, who is also contracted to Norrköping. This season he has been in amazing form in Allsvenskan – he scored 3 goals and provided 8 assists in 23 games so far.

“His grandfather, Gudjon Thordarson, is one of the most famous coaches in Iceland history, who worked at Stoke and Barnsley among others. His father, Joey Gudjónsson, represented his country 34 times and had a good spell at Leicester. His uncles are famous too, especially Thordur Gudjonsson, who was one of the best Icelandic players of his generation. It is hardly surprising, therefore, that Ísak Bergmann Jóhannesson is showing immense potential. In fact, he could become the brightest star of his legendary family. The versatile midfielder, who is usually used on the right flank but can easily play on the left or centrally, has become absolutely integral at Norrköping, providing three goals and six assists in just 21 Allsvenskan matches. His left foot is phenomenal, and Juventus are reportedly following his progress closely.”