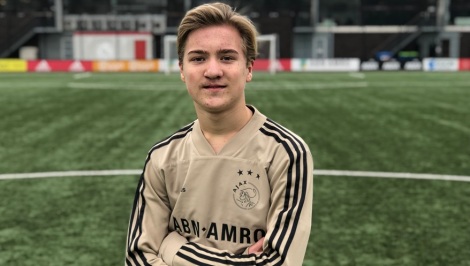 Since he’s 6 years old, Julian Rijkhoff has been playing for his favourite club: Ajax Amsterdam. He always stood out and has caught the attention of many „insiders“ within the club quite early, who have all been following him very closely. Rijkhoff was considered as one the by far brightest prospects within the club and this should mean something. Even people were saying that he’s been the most talented striker at the club since Patrick Kluivert – and it wasn’t just a single fan saying that. A lot of people did. Those people are also the same that have said the has also gotten the right attitude to fulfil his potential in the future. During the first lockdown has he described in an interview, he improved his physicality significantly and got used to training every day quite fast. He has already spoken about where he has to improve and if you compare his statements to his performances on his pitch, you can directly spot the development. So far example he mentioned his left-foot as one of his weaknesses and one of his last goals this season was scored with his left.

But after scoring 10 goals and assisting twice in just 8 matches at the age of 15, he’s now moving to Borussia Dortmund as soon as he turns 16. Reportedly, the reason for this is that Ajax didn’t treat him as well as he deserved to, also his agent messed up it up with the club. The journalist Mike Verweij, very close to the club, said that „a lot of things“ went wrong.

And this is in the end why Ajax loses one of their best prospects to Dortmund – what could cost them a lot in the future.

Julian Rijkhoff is a well-rounded striker, who’s already pretty tall for his age. With 1,83m at the age of almost 16, certainly, he’ll grow a few more cm in the future, what can only help him. In the technical aspect, he’s brilliant and is capable of executing almost anything that’s required. He loves to take volleys with his first touch and even if not every single one of them is perfect, it’s still remarkable with how much confidence a 15-year old is playing against 17-year olds. To get back to his first touch, which’s also very clean. When dropping a bit deeper from the striker position into midfield or off the wing, whenever he receives the ball, the first touch is always clean. Most of the times he does only need one touch to perform any action, for what his teammates need two – and we’re talking about Ajax Amsterdam.

Whatever he does looks very clean and smooth. Even with his height and physique, he looks very agile. Talking about his physique, he also understands it quite well to get his body between the defender and the ball as soon as possible, when receiving the ball. Right here he isn’t perfect yet, but it is once again remarkable how complete he’s for his age.
His speed of execution allows him to react always 1-2 seconds quicker than his opponent and thus he does always have a certain advantage in the final third. With the given attributes and has hinted earlier, he likes to take part in the build-up and is always keen on staying connected to the midfield. Whenever he’s under pressure, he sometimes surprises everyone with a certain move/touch. Occasionally, he loves to let the ball through his legs or goes for a fake-ball roll.

The 15-year-old is already unique in a lot of aspects, but his best skill might be his ability to read the game very well and thus having the perfect timing when making a run into the box., Whenever there are low to medium crosses into the box, he always converts them easily.
In front of the goal, he always remains very calm and even has the courage, as well as composure and technique, to lob the keeper from time to time. His shooting technique is already very good, but it still seems like that there’s a lot of potential left. His left-foot is solid, but he can’t be considered as completely both-footed yet.

Against the ball, he’s also solid and knows from which angles to attack with the right intensity the goalkeeper/defender. He also encourages his teammates quite often during the game, offers himself and demands the ball loudly. His leadership qualites can be seen in the form of him taking responsibility and shooting penalties when ever he can.

It’s hard to find any negative aspects in his game because he’s very well complete and as mentioned there a few areas where a bit more potential is left than in others, but he doesn’t have any significant weakness.