– pacey and determined forward with killer-instinct, interesting technique on the ball and cleverness at his off-the-ball movements

Scarlett outpaces his opponents and scores with a great header. 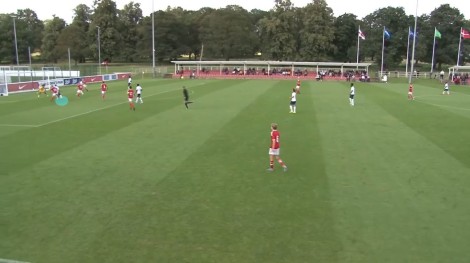 Scarlett loses his marker with a great feint and scores.

Dane Scarlett is a product of Tottenham youth academy. He started playing with the first team in the pre-season friendly matches in August 2020, but returned to the Under-18s at the start of the 2020–21 season. Thanks to his great performances and many goals for Spurs U18s he made his professional debut in the Europa League game against Ludogorets Razgrad on 26 November, coming on as a substitute for Lucas Moura after 82 minutes. At the age of 16 years and 247 days, he became the youngest player to have appeared in a senior first-team competitive game for Tottenham, beating the previous record held by John Bostock.

“A year ago sustaining a season ending knee injury. To making my @SpursOfficial debut, also becoming the youngest ever Spurs player is a dream come true for me and my family. Thanks to everyone that’s supported this far. It was a shame I had to make my debut without you Spurs fans.”

(Dane Scarlett on Twitter after his professional debut for Tottenham)